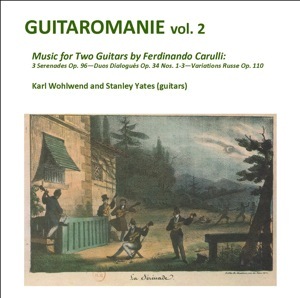 This recording features music of Ferdinando Carulli for two guitars.

Karl Wohlwend with flutist, Kimberlee Goodman, this recording features intriguing music for flute and guitar, including the world-premiere recording of The Frame, written

for and dedicated to the EOS Duo by Garrett Ian Shatzer. 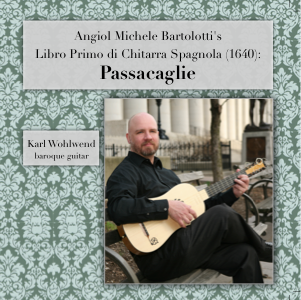 This two-disc set contains the first-ever recording of the entire cycle of Angiol Michele Bartolotti’s 24 Passacaglie. This landmark work from 1640 might possibly be the earliest-published occurrence of a cycle of pieces in all keys.

The music is performed on a replica instrument by Chad Neal based on a French guitar from 1680.

Including performances of Preludes by Francesco Molino, Op. 20 Caprices of Luigi Legnani, Etudes by Giulio Regondi, and featuring, the first-ever recording of the Op. 11 Caprices by Marco Aurelio Zani de Ferranti.

You can also hear these recordings on Youtube, Spotify, and Apple’s iTunes.

If you’d rather, you can also send me a check, made out to “Karl Wohlwend” at 503 E Weber Road, Columbus OH 43202. Make sure to let me know quantities and which CD you’d like. They are all $15, except the Bartolotti Double-CD, which is $25.

If you have any questions or comments, please e-mail me.